Is Leonardo DiCaprio a genuine environmentalist?

there is a meme about DiCaprio circulating lately on SM which causes an unstructured discussion. lets try to bring structure into this topic, ask serious questions and develop sound answers thereto. 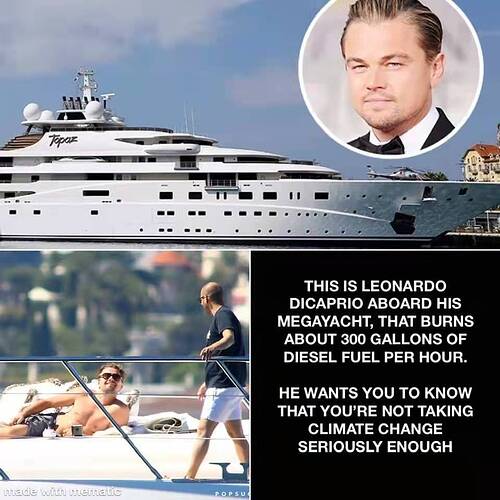 comment by Nitin Dani: Apparently not a lot of truth in that meme… we did a general discussion on that and this is what emerged… I don’t support private yatch ownership but I do think we need to make sure that the info we are being fed is the truth… esp for someone like Leo who we know has been doing a lot in raising awareness and taking actions on the climate front.

comment by Jeya Ibrahim-Lecomte: his is a great example of research before taking anything at face value. I’m in marketing, and as much as I love my work, I also know all the tricks in selective messaging. Memes like these are made to rile people up - same as how instagram-worthy quotes are not often credited to the right people. We don’t know Leo personally (although I do wish i do!), but he has used his name and fame to further an important message for the world. We should always research everything we read or see - no matter how small.

Good point. Critical thinking is an important trait. However, it‘s not about the pictures or whether this yacht burns 300 or 150 gallons of diesel, but about the confluence of environmentalism and spheres of justice. A person that flys every year thousand of miles around the globe does not set an example to follow for others - quite on the contrary. A person that owns several luxury homes and multimillion private assets no matter whether they include a yacht or not does not set an example for sustainable living. That person will much more drive the aspiration of others to acquire such assets. humans learn mostly by imitation and public figures like DiCaprio are the semi-gods which many want to be. If what such ppl preach and what they practice falls apart, we have a problem. That’s why true transformers in history like Ghandi or Francis of Assisi often pledge abstention from material wealth. When DiCaprio did Before the Flood he simultaneously worked on The Revenant. Don’t misunderstand me, I liked both films as art work and for their message, but I think it’s fair to start to ask questions about who is allowed to do what. Cap personal wealth at 100 mio USD? Limit annual air mileage to 30k? How much individual consumption can take a planet with 8 billion of us if we model US resource use? The Revenant was shot in the very south of Argentina because there was too little snow in North America. The director himself questioned in an interview if the film was worth the effort. DiCaprio flew in addition to this project around the globe for Before the Flood. Wd ppl listen to Greta Thunberg if she flew in private Lear jets around the globe? A meme might use like caricatures the visual language to emphasize certain aspects but mostly they have a true core which is why they were made in the first place.